When it comes to concurrency my main axiom is: concurrency issues like race-conditions have to be avoided by design because detecting those via testing is pretty hard and actually close to impossible.

So how can we design the collaboration of concurrently executed parts of a software system in a way that classic concurrency issues are avoided?

Before discussing how concurrently executed components could communicate with each other, let’s take a look at different types of concurrency and the particular needs for collaboration these might have.

Imagine there is a task to be performed which takes longer and which does not produce a result relevant to the “main control flow” of the application.

An example could be sending an e-mail to inform the users of the application about the availability of some result. If we assume that potential errors are handled by that component directly, this component would not produce any result relevant for the main thread.

In such a case the “main control flow” could just “fire” some concurrent task, e.g. spawn a thread, and “forget” about it immediately, so no collaboration across threads would be needed. 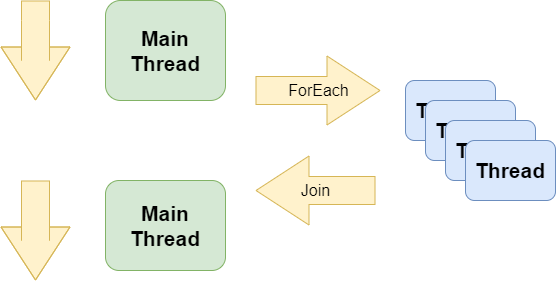 Another type of concurrency would be the parallel processing of some data without causing side-effects. This means, the data can be split into independent chunks which can be processed individually and the partial results of each chunk can finally be joined to get the complete result.

An example could be the reading and parsing of a bunch of log files.

In such a case an “active collaboration” between the threads processing the individual chunks is not needed. The “main thread” waits for all “worker threads” to complete and then joins the partial results.

One nowadays quite popular approach of handling concurrency is asnyc/await also known as Promise or continuation.

Simply speaking, this means an asynchronous task is started and a function or delegate is passed which will be called after the asynchronous task has completed, to continue the processing of the result of that task.

If such a continuation causes a side effect, e.g. the result of the task is written to some database directly and assuming the database is thread-safe, then no collaboration with the “main thread” would be necessary.

Otherwise, if the continuation needs to “return” the final result to the “main thread” then some collaboration obviously would be needed.

Imaging a component being responsible to perform a particular, longer running task like rendering a high quality image or computing a particular metric for a given log file. Let’s assume the initialization of such a component is expensive as well, so an application may decide to keep multiple of such components or multiple instances of the same component active as “background workers” to maximize the thoughput.

If such components produce results which are again inputs for further processing in other components then active, bi-directional communication would be needed between multiple threads.

How can threads communicate?

Assuming a system which uses such “background worker” components to process concurrent tasks, how could these components communicate with each other?

This would obviously cause any kind of concurrency issues (race conditions, data corruption) unless we make those components thread-safe e.g. by protecting the mutable data of each component with critical sections.

But this will result in a design and an implementation which is not desired. We would rather like to keep most of our code single threaded as this is simply the much easier programming model.

So if passing references from one thread to another is not a good idea, how could threads communicate and exchange data then?

Plain vanilla threads simply cannot communicate with each other without using some kind of shared data. As discussed, such a data structure should be dedicated for inter-thread communication and has to be safe for being accessed from multiple threads. Most programming frameworks already provide ready to use thread-safe data structures like thread-safe container implementations. In .NET such containers can be found in the System.Collections.Concurrent namespace.

Additionally to a thread-safe data structures we usually also need some “thread synchronization events” to communicate from a “producer thread” to a “consumer thread” that new data has been added to this data structure. In .NET examples of such events are the ManualResetEvent and the AutoResetEvent.

If we now combine a thread-safe data structure with such a thread synchronization event and FIFO semantics, we get a thread with a message queue as single communication API.

Such a design exists in many software systems under names like “actors”, “message pumps”, “mailbox processors” and “agents” and it provides an elegant way to add concurrency to a software design without drastically increasing complexity.

A simple design approach to encapsulate the thread and the message queue is to provide a base class which calls a method implemented by a derived class whenever a new message arrives. 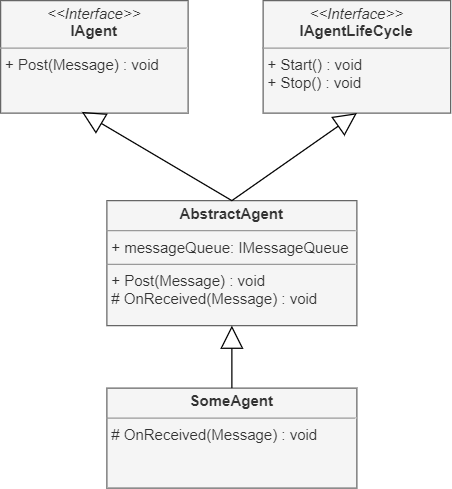 The base class would also implement two interfaces. One interface which will only be used by the infrastructure to life-cycle the agent and another interface used to send messages to such an agent.

I would recommend to put the actual message queue implement behind some interface as well so that it can later be replaced, e.g. by a persistent queue implementation or that features like logging can be added easily when needed.

For the actual concurrency implementation I would recommend to not reserve a dedicated thread per agent but rather use a thread pool or a task pool to process a received message to avoid wasting operating system resources. As the message queue design ensures that only one message at the time is processed, it also ensures that only one thread at the time is operating on the data of such an agent. This means, it doesn’t need to be always exactly the same thread processing the messages so it is safe and efficient to use a thread pool for such an agent implementation. 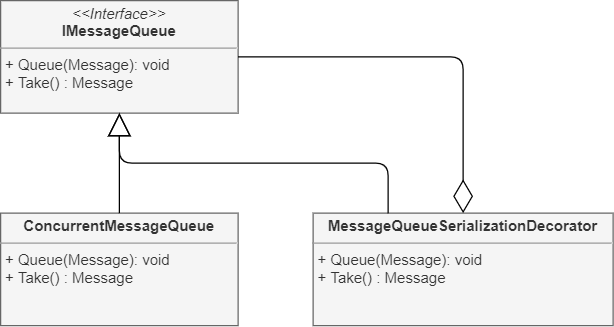 Besides the semantical meaning, messages always only consist of data and must not contain any function pointers. In fact, messages should not contain any pointers or references to any data structure at all which is accessible from other components. In other words, all data contained in a message have to be owned by that message which means this data is either exclusively created or explicitly copied for that particular message.

To ensure this concept of “pass by value” in a bigger code base it can be helpful to serialize a message e.g. into JSON when it is put into the message queue and to deserialize it when it is taken from the queue by the agent. As this certainly impacts performance such a diagnostics feature should be implemented as a decorator of the message queue which is only active in the development environment. This way any violation to the “pass by value” concept would be detected early on.

But there are still pitfalls.

In a pure agent based system those agents would only communicate with messages. As every practically useful system has to interact with the “outer world”, there would be dedicated agents “owning” these input ports from and the output ports to the outer world. To ensure this ownership by design these agents would even create and initialize the communication to such external services or devices, e.g. an agent owning a database connection would create this connection by itself and may not even share the connection string with any other agent.

In reality agents often have dependencies, references to components or services passed to the agent during construction. Such components and services either need to be thread-safe or it has to be ensured during composition of the application that each dependency is owned by a single agent, so no other agent uses the same dependency. Depending on the size of the software system it might worth the effort to invent some static code checking rules which ensure this ownership of dependencies.

When it comes to actually sending a message to an agent there are basically two communication patterns we could use:

1) Direct messaging: The sender either has a reference to the receiver agent or the agent system has some form of agent discovery, so that the sender can send a message to the receiver agent directly. 2) Publish/Subscribe: This usually requires some kind of “broker”, “bus” or “mediator”. Agents being interested in some type of message would register to the broker. A sender would then send a message to the broker which would then deliver this message to all interested agents.

Each pattern has its own pros and cons. One decision criteria would certainly be the need for many-to-many communication. Another criteria could be how decoupled agents should be, means how much knowledge an agent should have or needs to have about the topology of the “agent network”. 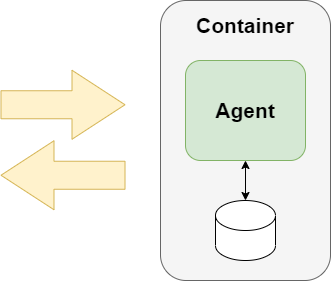 If an agent is designed and implemented such that

then it would only be a small step to move this agent to a container - could be a process or some “real” container technology - and so make it individually deployable.

Some may call this a “micro service” then …

As to my observation in object-oriented programming developers focus too much on calling APIs, telling an object to do something or asking an object for an intermediate (synchronous) result. This approach does not work well when we need to decouple “what gets done from when it gets done”.

A message based design much better addresses this need but it also requires a different mental model. In a message based system communication is always asynchronous - messages have no return values, instead a response message may arrive in some point of time. This may sound quite complex initially but it actually leads to a much more decoupled design and so eventually leads to less complexity over time.

Of course many other design tactics and patterns exist to ensure correctness of concurrent code. Agents are so far still my favorite choice when it comes to concurrency which also requires collaboration of concurrently executed components.

If you are looking for a concrete example how to implement such agents then check out this video:

If you wonder how such a system should scale then I have this answer for you: